Background: DNA-based technologies are reliable authentication methods for food products, enabling the detection of fraud, non-intentional substitution and control of mislabeling. The Chilean blue mussel (Mytilus chilensis) is a seafood commercialized in Chile under different formats, including packages of frozen specimens. In this format, the valves of mussels are removed during processing, thus impeding identification of the product by the consumer due to the lack of external characters.

Objective: To assess the authenticity of frozen Chilean blue mussels commercialized in southern Chile, particularly in the town of Osorno.

Methods: Six commercial brands of frozen Chilean blue mussel were authenticated by the Polymerase Chain Reaction-Restriction Fragment Length Polymorphism (PCR-RFLP) method, based on the analysis of an 18S rDNA fragment.

Results: Restriction patterns obtained indicate that three brands (50%) proved to be 100% authentic, given that all specimens contained in the package were Chilean blue mussels. The other three brands (50%) contained specimens of other commercial mytilids, particularly the cholga mussel (Aulacomya ater), in a variable percentage (12.5-50%).

Conclusion: This study based on the PCR-RFLP method provides evidence that Chilean blue mussels commercialized in a town located in southern Chile lack authenticity. This finding highlights the necessity for national producers to improve the production and/or packaging processes of this seafood. The authentication of commercial mussels is a matter of consumer interest and has been described in a recent patent on this issue that proposes an alternative methodology. 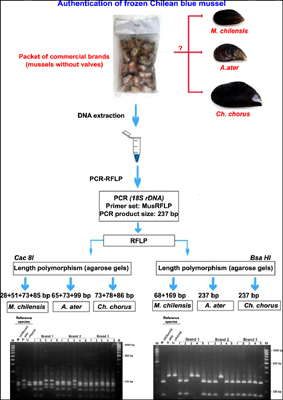